The world population is growing – fast! This growth influences the Earth’s biosphere, human societies and economy profoundly. Let’s face it: the Earth is round, it’s the only one we got, it is orbiting out there in space like a space shuttle; what the human species is dependent on and living from is the biosphere, which is a very thin layer of finely adjusted biological balances; and we have an economy going global based on ideas from the the seventeenth century: the invisible hand (market that regulate itself); a mechanical understanding of the physical world, biological nature and the human being. 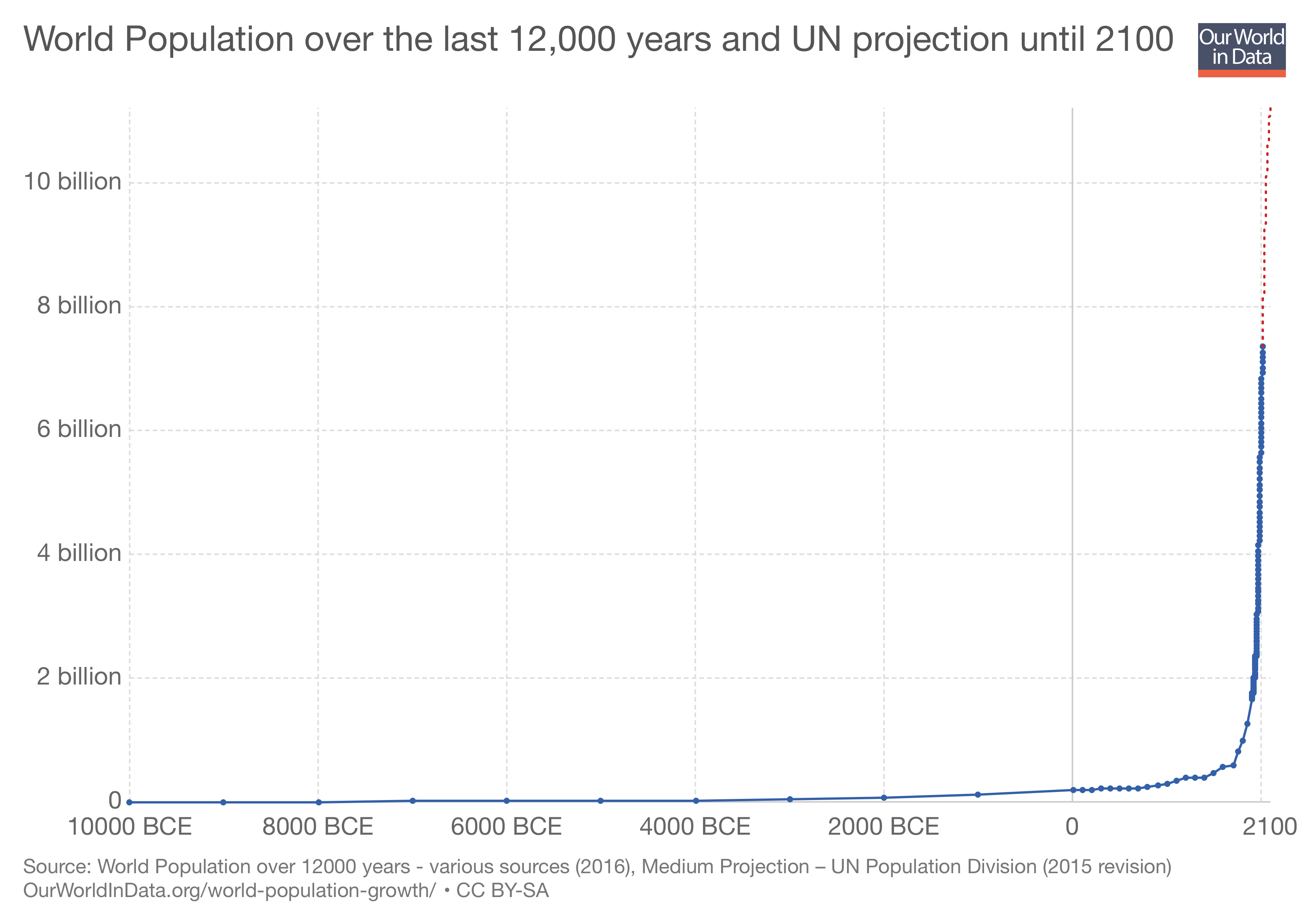 Now, if we look at job distribution as it has developed this can be a scary image as well. However, it can also be told as a succesful story of social and technological progress and how the human species has been able to come up with work discipline, organizations, production plans and new technologies that were very efficient and could feed a lot of mouths. So, if you look at the job distribution the result is that we produce a lot of food and a lot of goods, but if people are out of jobs… who’s going to buy the products? The machines, the robots that produced the goods? 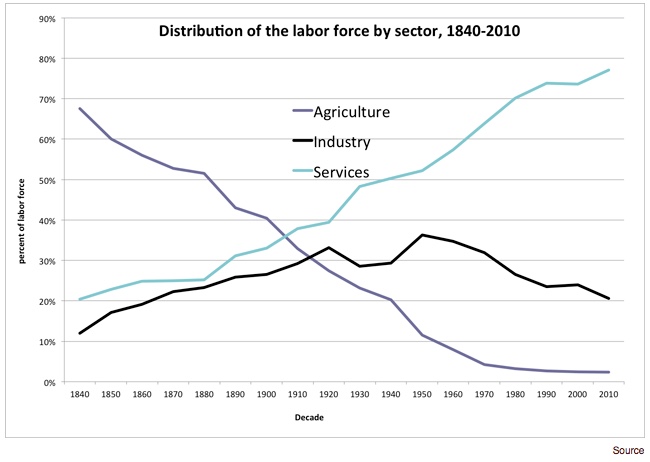 What we see is that agriculture uses only 3-5 % of the labour force, and industry is almost steady with only an increase of 10 %. The distribution shown above is what we see in the USA, but the over-all picture is the same in other countries. (See: https://www.bea.gov) In the near future we will see a fusion of machines and artificial intelligence – called robots – probably reducing jobs in both industries more, once again. When it comes to services artificial intelligence will take its toll on many routine jobs, because their routines can be turned into an algorithm.

The global labour market has seen only weak progress in the area of working poverty. In 2017, extreme working poverty remained widespread, with more than 300 million workers in emerging and developing countries having a per capita household income or consumption of less than US$1.90 (PPP) per day. Overall, progress in reducing working poverty is too slow to keep pace with the growing labour force in developing countries, where the number of people in extreme working poverty is expected to exceed 114 million in 2018, or 40 per cent of all employed people. (ILO. World Employment and Social Outlook: Trends 2018, p. 1)

Now, if we add the different logics of all this together, we look into a near future whit a hefty population growth that is followed with no or very little job growth and with wealth ending up with a small number of persons.

This is a perfect example of structural violence, which is the prescription for social conflict, unrest and direct violence.

This is not a sustainable development, not a just development and we can do much better - all of us. But we have to think and act out of the seventeenth century thinking.

In TurningPoints, we think humanity has come to a situation in which we have to re-define: work, leisure, economy, ownership, consumption, growth, etc. 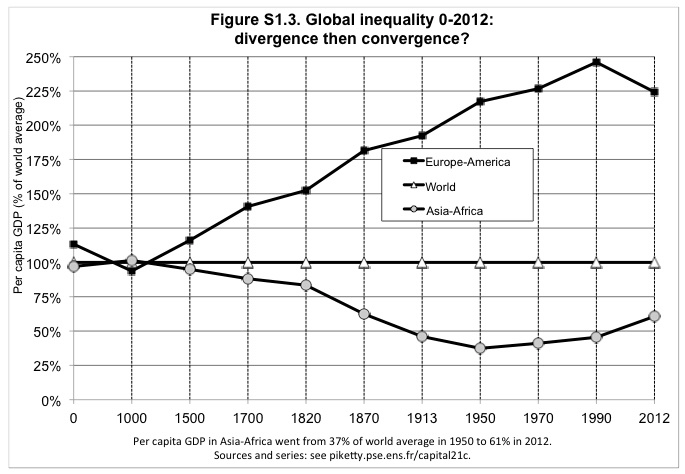 Above. Thomas Piketty in 2013 showed that inequality is rising - and also that it is not work that reduces inequality. According to Piketty, wealth is rising for the 0.1 % because of inhertance and the ownership of shares. Both of which are not related to your own work, but the work of others.

One Earth, 11. billion people and a paradigm believing in competition and limitless economical growth – this simply doesn’t add up, and so we have to change our thoughts and behavior fundamentally, if we want our children and their children to have a good peaceful life.

We have to come up with products that don’t harm nature; we have to come up with businesses and ways of production that is regulated by other factors than market and blind competition; and we have to come up with an economy that respects the limits of the biosphere, while at the same time creating new ways of economical distribution which will also prevent frustration, unrest and violence. If we look at the growth of the world's population we could get scared. However, we could also regard it as a success, because the growth is closely related to children not dying in the first years of their lives.

There are however two problems born out of this success: each of these human beings need an economy which they can live from. This is their right according to the UN Declaration of Human Rights, article 23. The next problem is that we, today, have monopolized economy, so that only very few persons ‘earn’ the wealth produced by the millions. There is no trickle down economy that can compensate for this phenomenon. And in the end the result is: people become so rich they can’t spend the money they earn fast enough. At the same time – and as part of the very same economy – people have to live for less than a Dollar a day. Some even die from starvation. The rich is not happy and the poor is not happy. And they both fear each other.

In TurningPoints we think so. Actually, we think we don’t have a choice. We have to come up with new ideas, and as a matter of fact, today we have a lot of new knowledge, but we need to get it into the ‘real’ world. And do so before it is too late; before the ecological balances are so much out of balance that we can’t ‘fix’ it…

This is what TurningPoints is about, and what we work with...

TurningPoints: Because ending poverty requires the end of violence!